Cards Against Innovation: What the world’s most offensive party game does right 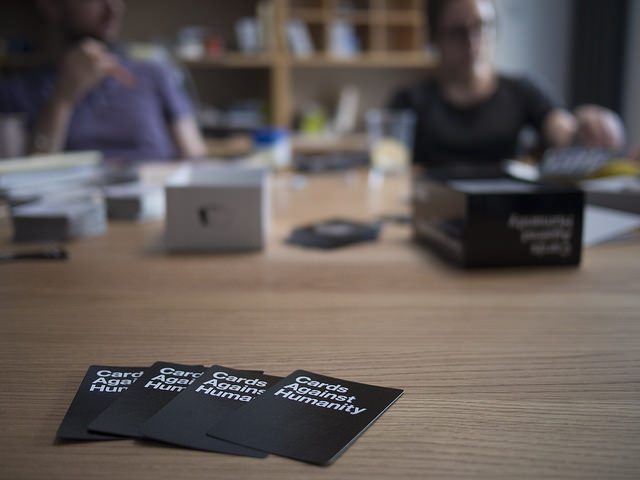 Your users know your product better than you do. Are you accessing and extracting that insight to make your product better? It takes a lot of confidence to put your idea out there, and let your users run with it. That is why I love Cards Against Humanity (CAH). (If you don’t know the game…catch up quickly).

It seems obvious that the best new ideas are going to come from the people playing the game. That isn’t something to be threatened by; it’s something to capture and capitalize on (as CAH did by publishing under a creative commons license which allows users to adapt and remix the game, like this Cards Against Originality app by Dawson Whitfield).

In the last year, I traveled a lot and spent a lot of time with people of various cultures around the world. One of the things I loved exploring on the road was the universal love for CAH. I loved picking apart the seemingly universal desire to be naughty or offensive or just plain crude and laugh at it.

The game is one of those things that people will tell you won’t work with certain people, or certain cultures, but in fact it does. (Even though it currently only comes in Anglo versions: US, CAN, UK, AUS)

People even approach ‘being offensive” in the same way:

However, the users quickly start to tailor the game to the needs of the group. It works in the same way as drinking games (i.e. “we play by these rules”).

I believe soon you will start to see a range of like-minds creating their own versions of CAH (i.e. women, computer scientists, etc.). And this can happen to any brand: your users can create new ideas, which are specific to them, their culture and their needs. These user generated ideas can lead to products that are more relevant than those created in a closed conference room, simply because they were created by the people who love and use them.

At antedote, we know how important it is to approach innovation with the user in mind. Our proprietary technology allows us to tap into user creativity and incorporate it into products and ideas before they launch.

To learn about antedote’s new platform, Idea Accelerator, that allows you to explore and iterate concepts early in the development journey with consumers globally and in real time, please click below: