So which country drinks the most beer in the world? In terms of per person consumption, European countries predictably dominate the top 10 (USA is #13). However, in terms of volume, China has been at the top of the list since 2002, with it’s citizens drinking more than 450 million hectoliters of beer each year, more than double the amount of beer we drink in the US. Four of the world’s top 10 beer brands in terms of volume are from China, with Snow and Tsingtao taking the top 2 spots, outselling Budweiser and Bud Light in third and fourth place. It’s not just from the volume of its nearly 1.4 billion inhabitants either – by 2017, China is expected to beat the US to become the world’s biggest beer market. China’s beer industry is expected to reach over USD 100 billion in 2018, up from USD 75 billion just last year, according to Euromonitor. So what exactly is driving the growth of beer in China, and what can US markets borrow from China and Asia’s take on beer to overturn 3 years of straight dips in sales?

Having worked and lived in China and other parts of Asia for the past 8 years, I’ve witnessed some interesting developments contributing to the growing popularity of beer. While hard liquor manufacturers have been hit hard in the past year by the Chinese government’s anti corruption crackdown (many highflyers and officials were supposedly receiving pricy hard liquor gifts which conveniently had high re-sell value), beer has benefited from steadily growing sales. Part of the upward trend is due to beer solidifying its role as a great drink with food. Beer also is a more approachable, affordable, and unisex friendly social catalyst compared to wine and liquors. In fact, there’s even evidence of beer and hard liquor becoming “frenemies”. If you can’t take liquor down, why not create new rituals to form new alliances?

Beer and food naturally go hand in hand. In the US, beer and barbeque, or beer with your choice of junk food while watching the game come to mind as intuitive pairings. However, only a relatively small percentage of beer is consumed with food in the US compared to China, where 70% of beer is enjoyed at a meal. While wine, baijiu (Chinese high proof white liquor) and Chinese yellow wine (huangjiu) are still the drinks of choice over food for more sophisticated palettes and VIP occasions, Chinese consumers think the refreshing, cool taste of beer is a perfect complement to the savory, spicy, greasy and deep fried foods they love. That all sounds like a fantastic opportunity for foreign brewers to tap into, but the challenge is that many Chinese consumers still naturally think of local beer brands first when paired with Chinese food.

Leading the meal occasion war is local beer brand Tsingtao. They were the first ones to introduce a new type of ‘fresh draft’ beer (chun sheng) in 2007, which is now the fastest growing variant in their portfolio. So what’s so special about fresh draft beer? Unlike draft beer in the US, it is still mainly served in bottles rather than on tap. The flavor profile is more ‘pure’ and bland. Fans swear it tastes more refreshing and smooth compared to regular beer, and is a better choice with their meal because the beer taste doesn’t compete with the flavors of their food, which should remain the hero at every meal. Chinese beer lovers are willing to pay more for it too, most fresh draft beers typically command a 20-30% premium over regular beers. Following Tsingtao’s move, many local brands such as Zhujiang, Harbin and Snow have also launched their own versions of fresh draft, but Tsingtao remains the segment leader as the first mover.

Beer is widely enjoyed over more casual meals with close friends and family, but one key barrier of beer at the Chinese dinner table is it’s humbler image compared to its more glitzy wine and liquor cousins, some think it’s not premium or ‘face worthy’ enough for important business dinners. To tackle this, AB Inbev China recently launched Budweiser Supreme, a super-premium beer brewed for consumption in fine restaurants, presented in an elegant large glass bottle resembling packaging cues of wine. At it’s pilot launch, wine glasses with the Bud Supreme logo were given to restaurants to serve the beer (compared to the typical mini highball glasses beer is usually served in) to complete the prestigious experience. With this new premium variant, it will be interesting to see whether it will appeal to the tastes of a new generation of Chinese VIPs. 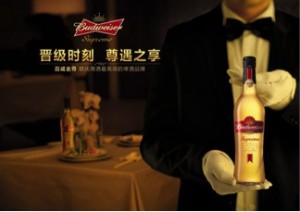 One reason US beer drinkers are switching to liquor is that they see it as a less expensive way to get higher alcohol content in a short amount of time. However, one can argue that there are certain moments when a slower, more gradual tipsy experience is preferred. Take the infamous Chinese karaoke session for example. While many of us think of karaoke as the ultimate get-drunk-and-embarrass yourself activity, KTV is another beast in China. When you go to KTV (China’s nickname for karaoke), there is always a group of people who take the singing extremely seriously; they are there to perform with prowess. That’s pretty hard to do when you’re drunk. Beer is actually a great ‘slow alcohol’ alternative to harsher liquors for these star performers.

Beer is also seen as the best drink to please everyone. In cities like Shanghai, even though ladies who can handle their liquor are on the rise, there is still a large group who don’t really know how to drink, or don’t like the taste of higher proof alcohol. Beer is the easiest 101 choice that both guys and girls can drink together. It’s a great filler or warm up to enjoy over drinking games to bond and break the ice.

Before the recent emergence of sweeter brews like Bud Light Lime-a-Rita and Redd’s Apple in the US, Taiwan Beer, Taiwan’s dominating local beer brand, had already introduced fruit beer in tropical flavors such as mango and pineapple back in 2012. With 2.8% alcohol content and a sweeter flavor profile, these fruit beers have exceeded initial sales projections and have found success as a summer or beginner’s drink that’s versatile and easy to like. The latest flavor added to the mix is lychee. Taiwan brewer Long Quan has even launched a Hello Kitty fruit beer line.

There’s also been an interesting rise of beer as THE drink to enjoy with live music. It helps dial up the atmosphere without getting people drunk too quickly. This year, Budweiser is cashing in on the electronic dance music craze in Shanghai by sponsoring Budweiser STORM, the first large-scale EDM festival in Shanghai featuring international artists and DJs like Axwell Λ Ingrosso, Kaskade and Kesha over the October golden week holiday this year. A perfect match? We think yes.

Sweet success: How can beer manufacturers play up beer’s more casual, accessible appeal to it’s full advantage, and enhance it’s role as a true social catalyst for both guys and girls? What new occasions and events can beer really own? How can beer cement it’s success as the relaxed, casual drink for everyone? 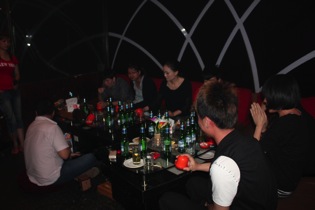 A typical night in a Chinese KTV, playing dice games over beer 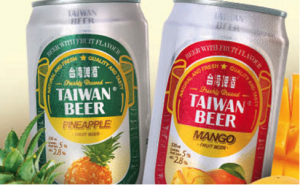 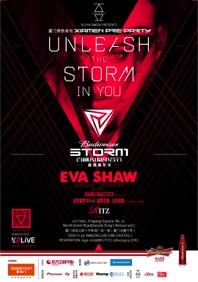 Beer and liquor, an unusual pairing.

There’s a growing fascination with cocktail culture in the US, which is stealing the hearts of beer drinkers, so it’s easy to label liquor as beer’s enemy. Yet in China and Asia, consumers, manufacturers, and bar owners are finding creative ways to marry the two. In some of the hottest Shanghai dancing clubs, owners are pairing champagne with beer in bundle deals (champagne is the fastest growing alcohol in China, especially among the ladies). Although an unusual pairing at first glance, they both have that light, bubbly, refreshing profile that actually makes sense, and drives more beer sales.

In Korea, there is a recent ritual of mixing Soju (Korean white liquor) with beer to make a new drink fondly known to Koreans as the soju bomb. At restaurants all over Korea, you can now find shot glasses for making soju bombs, marked with various guide lines on the glass for your choice of soju:beer ratio based on your personal tolerance of adventure for the evening. Some young beer drinkers in China have also started making their own beer and vodka cocktails for house parties to break the ice without getting drunk too quickly. 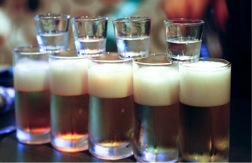 Soju bomb cups can easily be found in restaurants all over South Korea. Pick your own level of soju vs beer for your desired level of tipsiness.

It’s definitely challenging to innovate in a classic category that has been established in the minds and hearts of consumers over many years. Of course, beer plays different roles in evolving cultural contexts and product life stages. In a relatively developing beer market like China, the white canvas for it’s future is inspiring. Just with a few simple tweaks, beer can be re-expressed, renovated, and presented in refreshing new ways when you break down the confines of how it is currently being perceived. Here’s a challenge to brewers and beer lovers all over the world, take a fresh look at beer, it’s definitely here to stay, so let’s come up with some creative ways to reinvigorate the category.