The 5 Mindsets of Makers 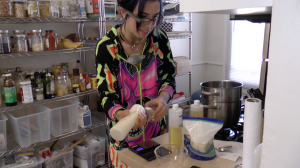 We met with Parker in her Oakland home. She welcomed us as friends and took us to the second floor of her home to chat. We met her cat and sat down in a dining room with an unusual feature —a small refrigerator of raw hair care products buzzing in the corner. The wall was bedecked with comics and drawings, and Parker sat in front of our other host, a hulking mechanical robot statue (an inheritance from her dad). Parker’s home was, to put it mildly, a place of creativity and independence.

Parker is a maker. She structures her entire life around being able to work with her hands and create things that connect her to other people. She works out of her own home as a hair stylist and is also the lead developer on Persephone, a natural hair care line based in Berkeley that incorporates local eggs, beer, and other raw ingredients. In her so-called spare time, Parker works as a graphic designer and experiments with her next venture: a line of luxurious, sun-protecting and vegan body balms.

Makers have created extraordinary things and even created non-existent categories, and they are clearly doing something right. Most notably in recent months, Palmer Luckey, 21-year-old inventor of Oculus Rift, sold his business to Facebook for two billion dollars. Similarly, Eric Migicovsky, creator of Pebble, took his company to Kickstarter and raised $10.3 million en route to pioneering a category he began tinkering with in his college dorm room a decade earlier. Stories like theirs are neither hard to come by nor exclusive to tech — if anything, it’s the rare industry that hasn’t in some way felt the impact of the emerging and innovative Maker movement.

The lessons that innovation leaders inside large corporations should draw from Makers, however, have been as muddy as the visions of these individual practitioners tend to be crystal clear. In many cases, the primary recourses have been acquisition or fast following — neither of which are sustainable strategies. This is why we at antedote undertook a study of Makers earlier this summer, conducting a series of interviews to tap into the patterns and habits of Makers like Parker that could help to guide the rest of us. What we found was far more than the stereotypical lone tinkerer in the garage. We found networks of driven individuals who love to create and share — and it is those networks that fuel their innovation.

At first glance, Parker herself is an entirely independent person—she works from home a lot of the time, she’s started multiple of her own businesses—but as we spoke with her, we realized that making for her was about creating a connection with other people. This fits a pattern among great innovators. As Professor Andrew Hargadon of UC Davis has noted in How Breakthroughs Happen, innovation is an inherently social process: individuals working on entirely different things link up and generate new, breakthrough ideas. Makers aren’t lone geniuses—they’re connected in a shared ecosystem for innovation.

Through closer examination of these Makers’ networks and behavioral tendencies, we identified five mindsets that these groups tap into to drive their work. Moreover, these mindsets of Makers reside in the people who already work in large organizations. Companies that can unlock and channel these energies through incentive, careful structuring, and ecosystem development can access new innovation opportunities — and make their teams a whole lot happier, too.

THE FIVE MINDSETS OF MAKERS

Who they are: The Advocate is someone who drives efforts forward and champions others, carefully selecting what to champion based on broad-based but relatively shallow knowledge of many different fields. They are the most outcome-focused of the makers, and often create frameworks and environments for other makers to thrive.

How to ID them: Look for enjoyment of knowledge in a wide range of topics and a natural drive to teach and share with others.

How they thrive: This is the person who love to be in contact with as many people as possible—as they spread ideas and thrive in an environment where they can show people the possibilities.

Examplar from our research: Marilyn: a co-founder of a cooperative marker space in San Francisco, has worked as a fashion designer, an author, and an illustrator but is most passionate about equipping others to become makers themselves.

Who they are: The Engineer is the skillful experimenter. They approach problems head on and trust that they have the expertise to find solutions, or can learn along the way. They don’t fear failure, in part because to them the greatest failure is in missing out on the chance to solve an exciting problem.

How to ID them: Look for a person with deep skill in their field of work, someone who gets excited about using and creating new tools that can fuel the creativity of themselves and others.

How they thrive: They are at their finest when exchanging ideas with other skilled makers to produce breakthrough solutions around challenging technical questions.

Examplar from our research: Marek: a roboticist and homebrewer who is as proud of the partially automated and robot-enabled brewing system he helped to design and construct as he is of any specific beer he’s ever made.

Who they are: The artist values play and creation, but also feels the need to execute an idea that comes to mind. They want their creations to resonate with others, and often design with a specific person in mind, in spite of stereotypes of being self-driven.

How to ID them: Look for someone who puts their whole selves into their work, and strongly needs their work to resonate with others.

How they thrive: They thrive with tangible objects and space to create freely and openly. They work well with entrepreneurs who can figure out how to scale, modify, and monetize their creations for larger audiences.

Exemplar from our research: Warrick: a designer who won a contest to build the largest art installation in the history of Burning Man based off an initial proposal he created himself that he’s now enrolling many others to bring to life.

Who they are: Inventors want to help solve other people’s problems or their own problems. They have a vision for how people’s lives can be changed through creating.

How to ID them: Look for fearlessness when it comes to undertaking a task, as inventors strongly believe that there is a way to execute any idea, including ones beyond their immediate means to deliver.

How they thrive: Their imaginations are endless and they effortlessly see the possibilities in the world around them. They are full of ideas and often excel when they partner with people who have the tools available to see their ideas become a reality.

Exemplar from our research: Elaine: a retiree with multiple sclerosis who sought to develop an all-terrain walker that would make her life (and those of others like her much easier). She worked with contract manufacturers to make the vision into a venture.

Who they are: The entrepreneur has a clear grasp of the big picture and sees all kinds of opportunities in front of them. They enjoy strategizing and often are able to find a way to make things work, even if it involves redirecting.

How to ID them: Look for someone who sees how ideas can connect to provide solutions that will reach many different people, someone who can pinpoint strategy and the opportunity for profit.

How they thrive: They thrive when crafting vision and strategy. They work best when paired with partners who excel in creating the ideas that they can turn into businesses.

Exemplar from our research: Greg: a small business owner who connects people with ideas to fabricators and manufacturers in Asia. He takes on partners whose ideas he believes can scale, based on his knowledge of launch logistics and market demands.

Interestingly enough, while all the makers that we spoke with exhibited at least one of these mindsets, they all found a way to build up a network that contained all these traits and behaviors, replicating the advantages of a more full-blown startup. Parker, for instance, is a hybrid of an artist and an entrepreneur who is incredibly resourceful. She closely connects with her customers as a hairstylist, and understands the values of her target customer. She has a supportive boyfriend (a fellow entrepreneur and artist) and collaborates extensively with her supportive team at Persephone, including engineers and advocates She uses existing research done on everything from SPF to earth friendly ingredients, and accesses online forums for information and feedback from fellow makers. She is incredibly well networked, and in a way that allows her to uniquely flourish as an artist and individual.

There are Makers in every company, people who are enthusiasts and creators, and through giving them space to be who they are and allowing them to share with others, companies can build networks of Makers that can naturally drive innovations. Through identifying these traits in their own people, companies can leverage these capabilities, allow individuals to excel in the roles that interest them, and adopt a more Makerly mindset that can keep them moving forward in the face of adversity.